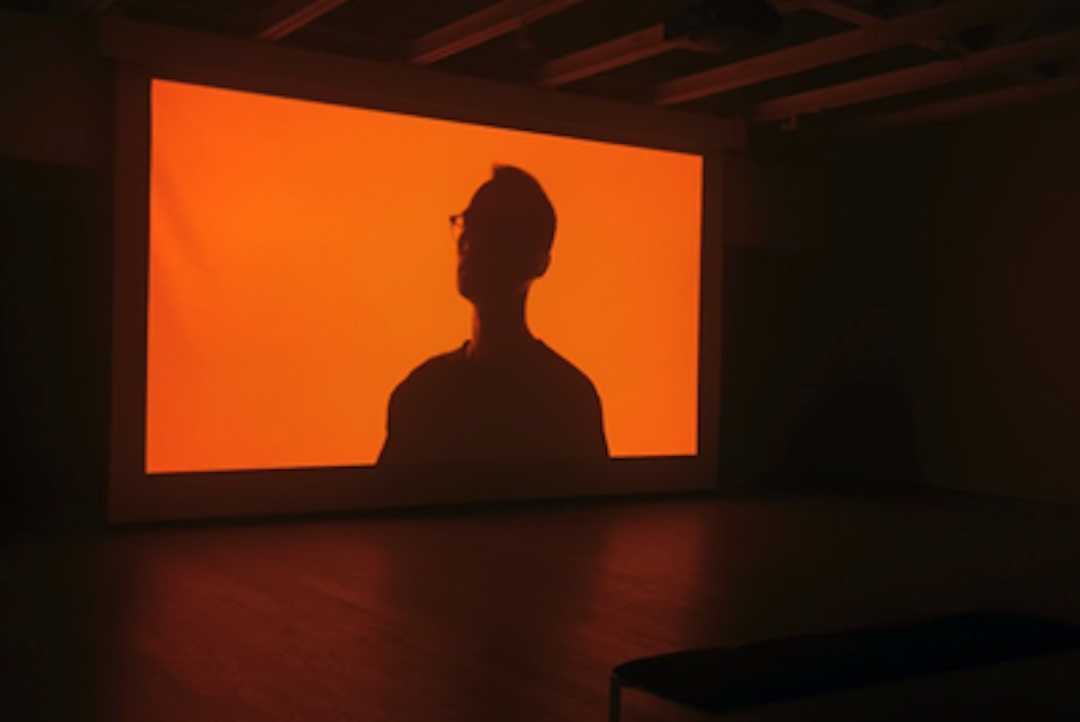 The Young Comrade is a pseudo-documentary that deliriously interprets Bertolt Brecht’s play, The Measures Taken (1930), as a real historical account about the founding of the People’s Republic of China. Born in Canada, the artist Alvin Luong, created this film as a personal attempt to reconcile the Chinese Revolution that had transformed two generations of his family into refugees and that eventually triggered their immigration to Canada. The film follows a fictional attempt to search for characters in Brecht’s play in China and features the performance of four altered acts of the play. In Brecht’s play, the Europeans wear racist ‘yellow-face’ masks that magically transformed them into Chinese people. In contrast, the Chinese-Canadian experience of being Western-minded but with Chinese appearances struck the artist as a similar diasporic experience.In this film, Loung contemplates on diasporic subjectivity with a ambiguous narrative that blurs the line between history and fiction, problematizes race, culture, and essentialism. 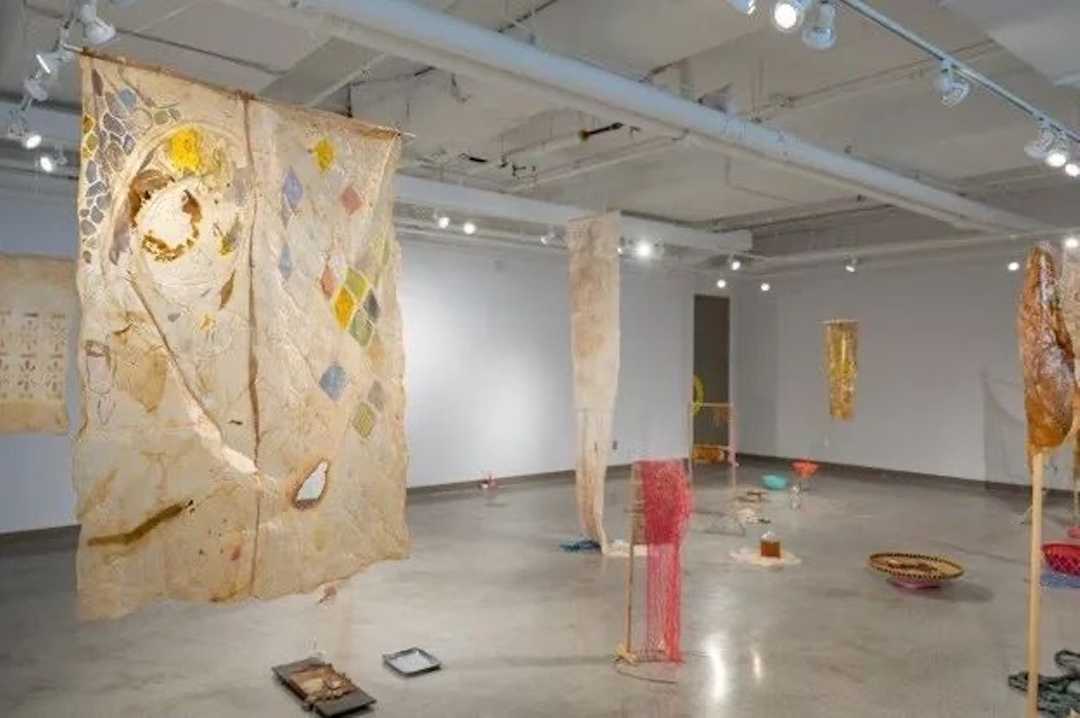 Kombucha, a fermented, lightly effervescent tea, first originated in China around 220 B.C., now has become a trendy health-conscious drink across cultures around the globe. Joy Wong uses SCOBY, the fermentation starter for kombucha, as her medium to discuss human migration and experiences of living away from one’s mother land. A starter SCOBY can yield infinite batches of kombucha by constantly adding tea and sugar, and with each fermentation the SCOBY grows and reshapes. Echoing the complexity of cultural inheritance, the original SCOBY eventually becomes impossible to trace. Wong is drawn to the way these processes shed light on the settlement of people in colonized lands, especially the regenerative structures that reinforce desirability and belonging for certain cultures while actively rejecting others.The slippery and fleshy SCOBY is transformed by the artists to become rigid, brittle, and full of texture, inviting viewers to consider how we are each embedded in a environment resembles a fermentation space and how our identities are constantly evolving and reinventing in such environment. 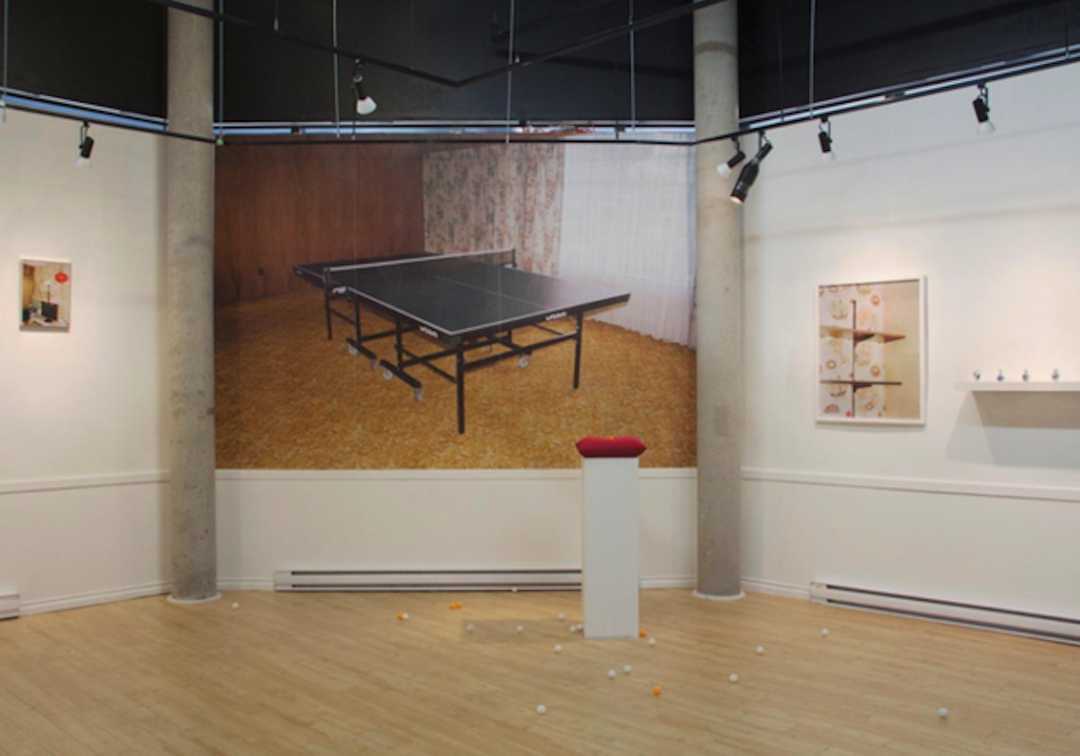 The title “I moved to 2756 on that street since 2016” is a quote in slightly broken English from the artist’s father, who is the current resident of the property that appears in the photographs. As a non-native speaker, the absence of the street name here reflects his inability to locate himself within the surroundings orientated by North American civilizations. This artwork speaks on the topic of segregation through cultural positionings. The hybridized decoration of colonial interiors such as the usage of wallpapers with objects of Chinese embellishment reflects an ambiguous living experience of immigrants as individuals who occupy no static belonging.

Although remaining intimate with the subject matter, Charlotte Yao borrowed techniques of museum displays and contrasting applications of the photograph medium to draw out the indexicality. This photographic installation unfolds the myth of a detached citizen in the multi-cultural landscape and encourages an objective analysis on the fractured identity of his, whose being resides in the pictures, and stood in front of the camera. 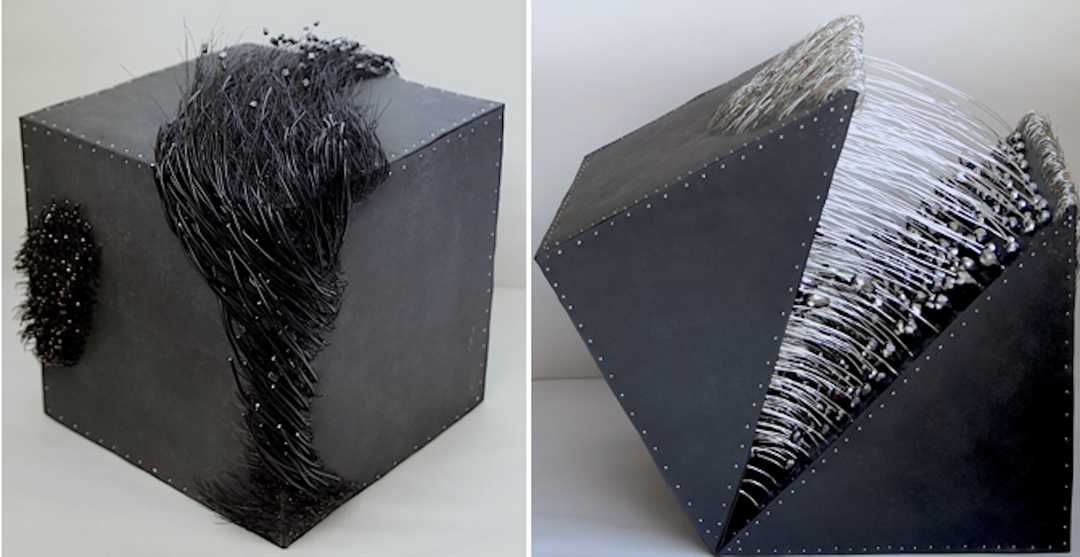 Sadia Fakih’s intricately detailed Venus Cube and Hematite Cube use pins, wires, and beads to navigate cultural hybridity. The legacy of Pakistani culture that promises beauty through its own handicrafts of embroidery (Orientalist idea of the East, feminine, and Other) takes its place on the two dark-toned cubes (Western minimalism, the rational, masculine and Self), creating a space for these rigid dualities to meet. The artist seeks for socially constructed hierarchies to realign, disintegrate and then re-aggregate into a biomorphic, alien form.

The original use of EPDM is meant to protect from the weather with impermeability, but becomes permeable with the protrusions of beaded wire. Her works delve into the idea of repulsion and sensuality at once in their alienness, evoking a sense of the Surreal. The two cubes’ shapes are unchanging, yet seemingly transforming and metamorphosing with disquieting liveness, their beings explore the artist’s place (or displacement) as a South-Asian feminine in the West while she explores the transitional spaces that erupt when imposing identities collide. 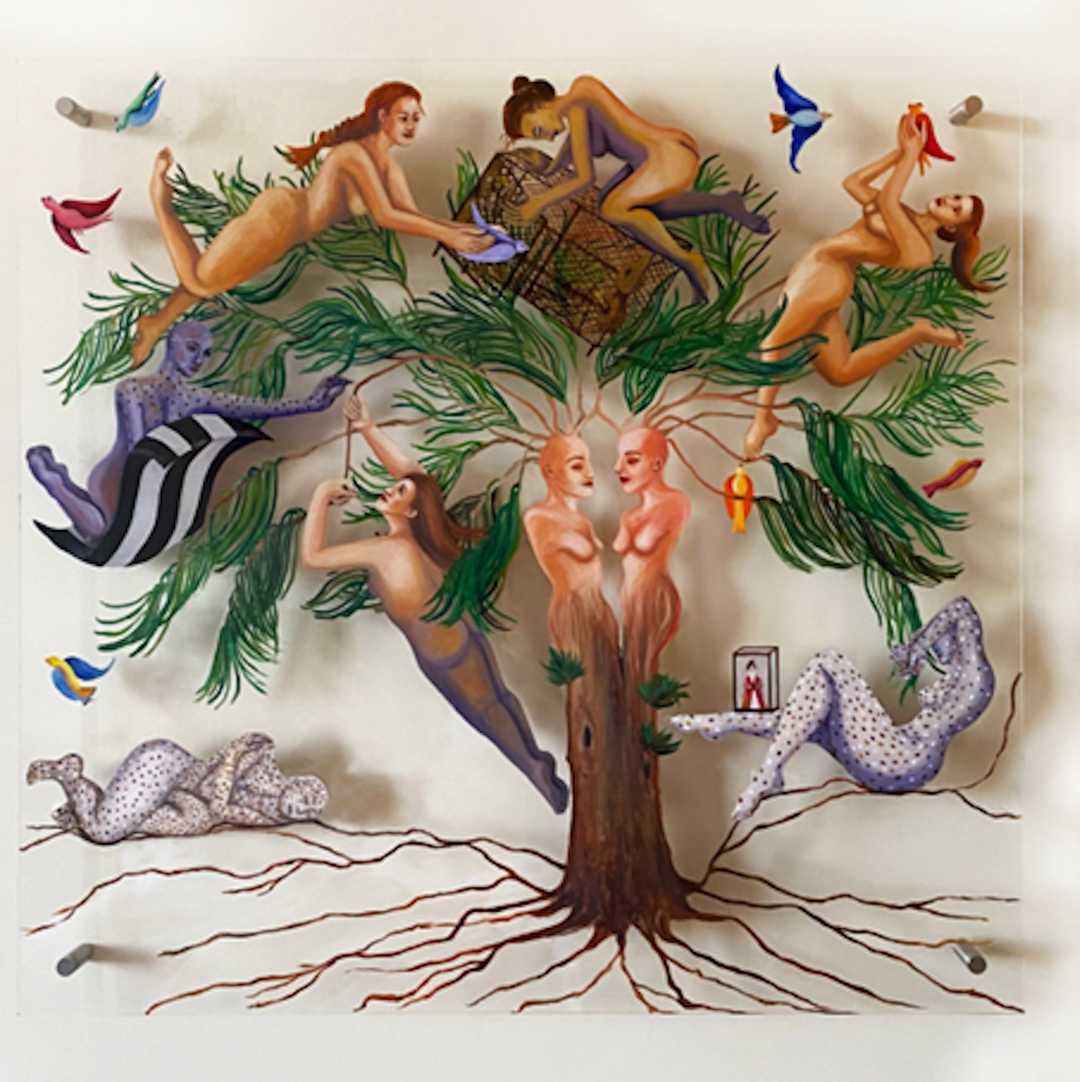 Contorted, vulnerable, and disengaged bodies emerging in abstract spaces are depicted by Anam Feerasta as deconstructed self-portraits on panels of plexiglass. These bodies and the shadows they cast allude to the artist’ view of fragmented identities as the concept points directly at her urge with ongoing struggle to build an independent identity.

The artist believes the process of claiming one’s identity lies within the perpetual nature of the fragmentation, eventually the alignment within oneself. While the rich colors and symbolism embedded in the work celebrate the female imagery, the multiplicity of her identity is derived from a troubling gender-biased cultural expectation rooted closely in a familial setting. “Disembodied Dance” seeks to challenge these longstanding expectations coming from the most intimate relationships. The sentiment of celebration gets translated into a sense of empowerment for women to break through barriers along the journey of their identity reclamation. 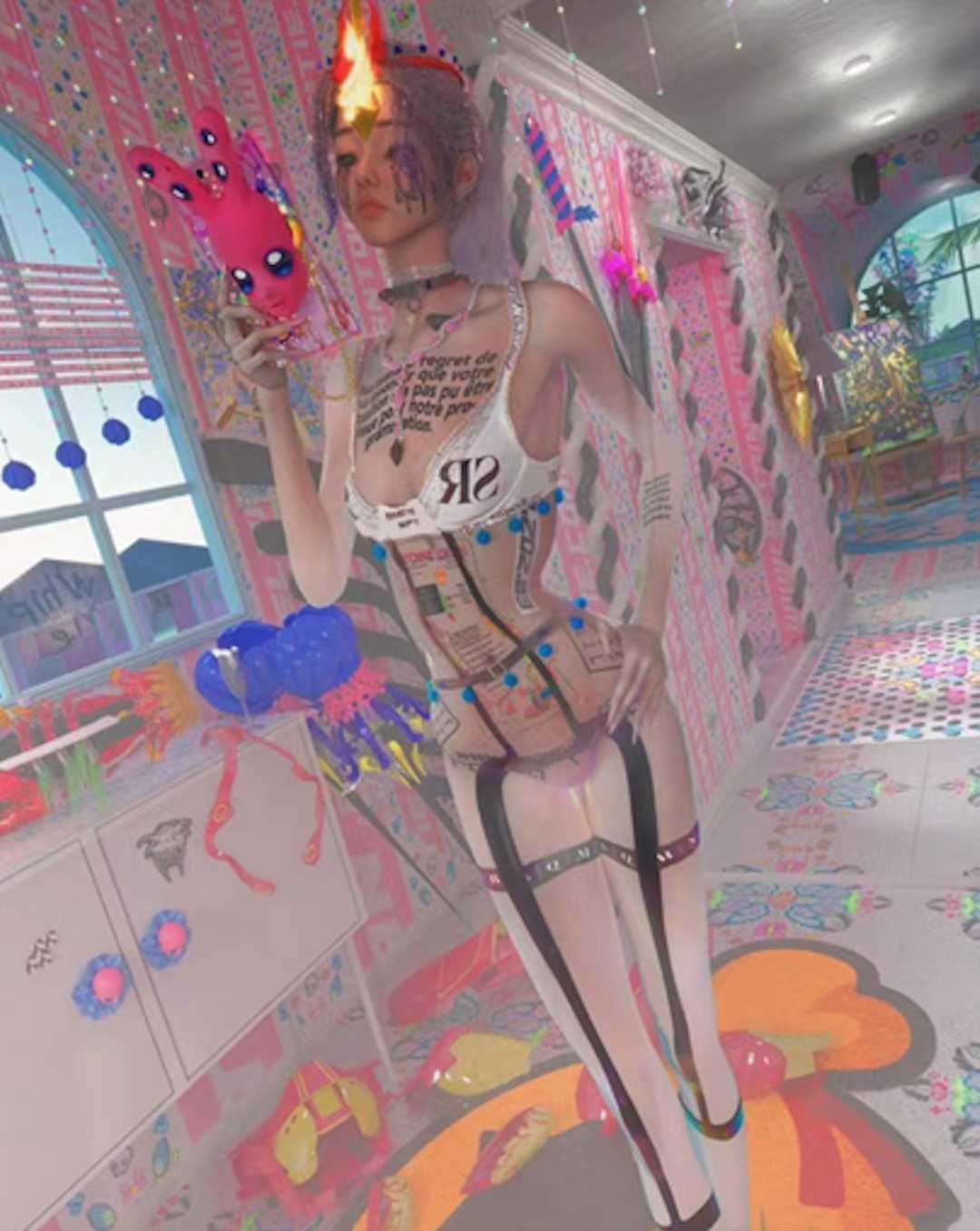 Championing transforming identities, Antonie Lortie works with both traditional medium and virtual technologies. The NFT piece, Cyberprime, juxtaposed with the acrylic painting,Hyper Phaneroid, both depicts the artist’s avatar, Princess Victoria Institunia, therefore both considered as the artist's self portrait and beyond. Princess Institunia is a virtual personification of the artist in the metaverse, and her fluid identity has been gradually modified through the artist’s continuous creative process since she was first born in January 2021. This avatar is an allegory of the shifting experiences contained in the artist’s mental space. Blurring the boundary, Princess Institunia, originally solely existing in the metaverse and digital works, was now being depicted in this physical painting, Hyper Phaneroid. Interested in connections among the political, cultural and social systems we inhabit in, the artist/Princess Institunia is dressed with her Curriculum Vitae in the NFT piece and a Cease and Desist letter in the physical painting. The digital piece experiments with the influencer aesthetic in which she is taking a selfie, whereas the acrylic piece appropriates the composition and sensibility from renaissance paintings, in which she is conscious of the gaze of the painter and viewers. Texts, symbolic pattern, and transverberation (often used in Christian mysticism) are all elements that constantly reappear throughout the artist's oeuvre. 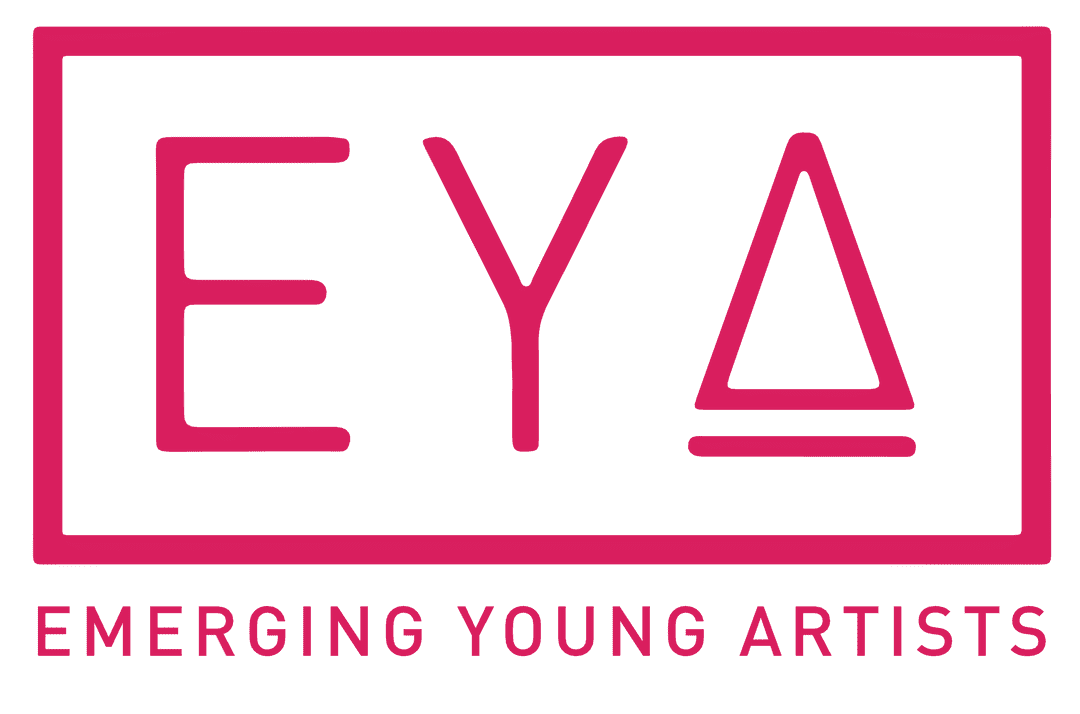 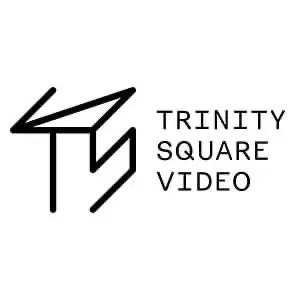